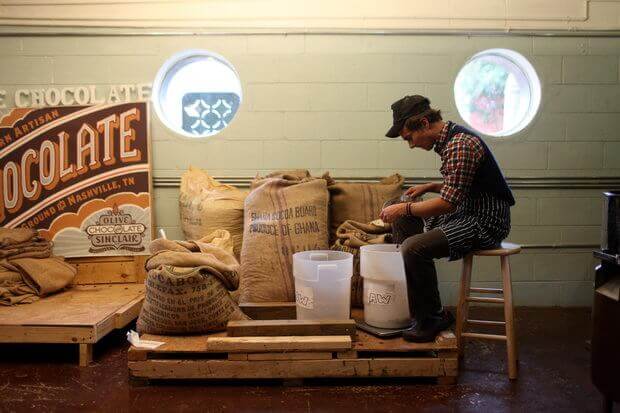 Nashville native Scott Witherow has a love for food, its history and all things vintage. After working in the food industry and local restaurants as a teen, Scott graduated from MTSU (Midddle Tennessee State University) and went on to receive his Le Grande diplome from the prestigious culinary school Le Cordon Bleu in London.

He then began working in some of the world’s finest restaurants, but Scott was drawn back to Nashville with the idea of making artisan chocolate the old-fashioned way. He purchased several small machines and started making small batches at a time, oven roasting the cocoa beans and hand cracking them. Separating the nibs from the shell, he dried them with a hair dryer and used an old French “chinois” brought back from culinary school. 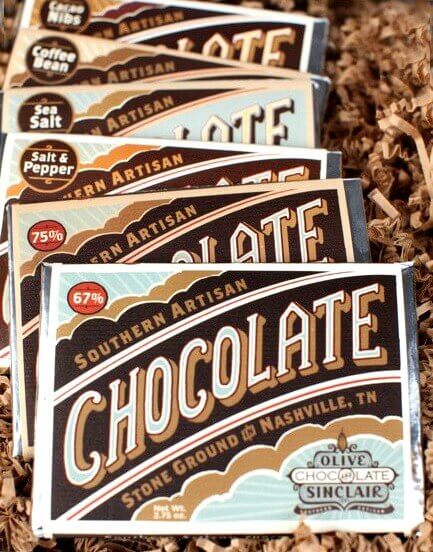 For two years Scott continued the laborious process to perfect his recipe and tested it on family and friends. With the help of his friend Bryce McCloud, who hand-carved a vintage-looking letterpress design out of wood to print the first packaging for his chocolate bars, each bar was hand wrapped. Southern Artisan Chocolate™ was born. Then Scott’s next goal was to build a chocolate factory to become the first “bean to bar” chocolate maker in the South.

In 2009, Scott founded Olive & Sinclair Chocolate Company, drawing on old family names. “Sinclair is a reference to my grandfather, and Olive is a reference to my wife’s great aunt,” says Scott. Located in hip East Nashville just a few blocks from where Nashville Wraps began, Scott’s collection of antique equipment from the early 1900’s grew to include two 2,500 pound stone grinders for the cocoa beans. In keeping with his Southern roots, he wanted to grind the beans just like grits are made. Scott searched the world for the finest cacao beans and currently uses 300 lb. sacks of beans from Ghana, Dominican Republic and now Ecuador. For a rich molasses taste, he only uses pure cane brown sugar, unlike most other chocolate, which only uses white sugar. He adds no lecithins, emulsifiers or artificial ingredients.

Just like any great chef, Scott speaks of his premier chocolate in “tones”, “layers” and “notes” – almost like a country song. Olive & Sinclair chocolate bars are hand seasoned with unique ingredients like buttermilk, sea salt and pepper. My personal favorite is the exceptional “Mexican Cinn-Chili” with organic Ceylon cinnamon and cayenne pepper.

Partnering with other local artisans has added another dimension of flavor to the chocolate, such as coffee from 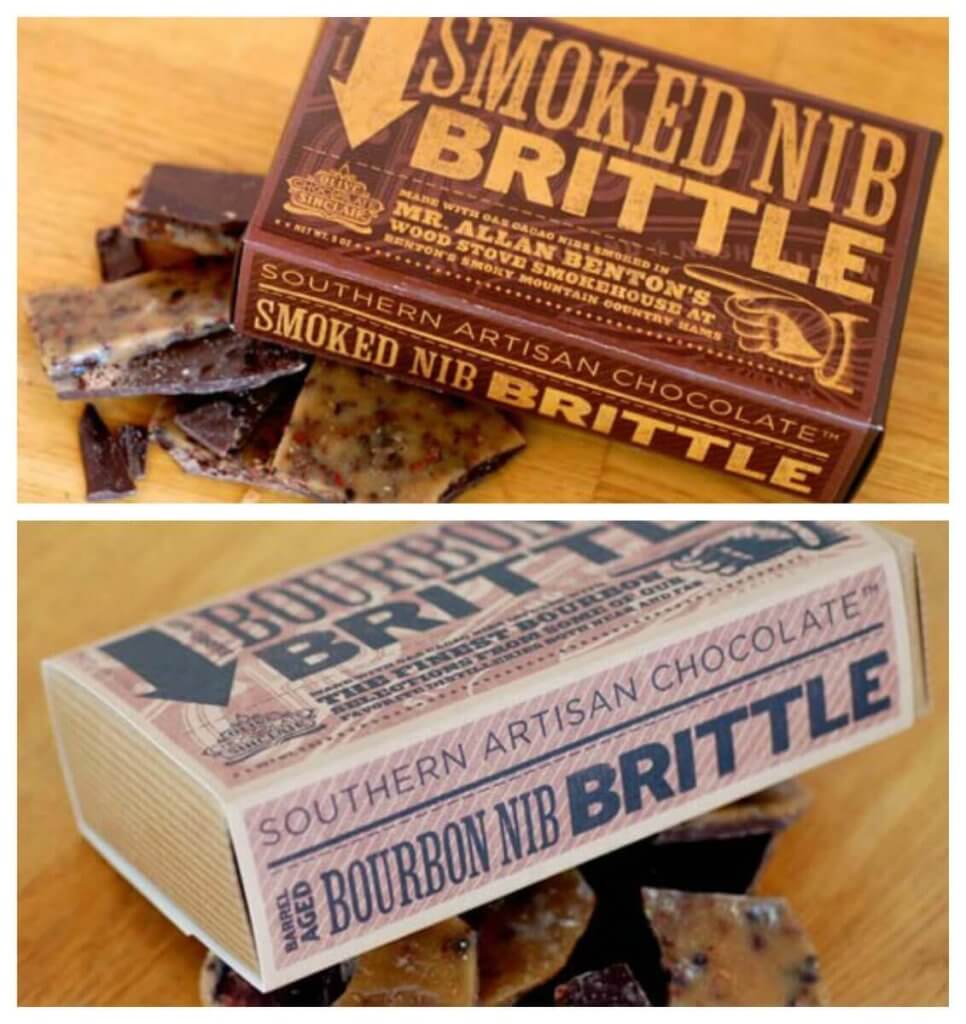 Scott also collaborates with some of the South’s finest distilleries to age cacao beans in bourbon barrels to create “Bourbon Nib Brittle” with subtle notes of apple, cherry and oak. Supporting another local Southern business, O&S uses Nashville Wraps’ candy boxes for their brittles and giant 40 lb. boxes of crinkle cut shred for their gift sets.

O&S is a zero waste facility. The parts of the bean that are not used in their chocolate bars goes to make other products. Thistle Farms uses the nibs to make their Chocolate Facial Mask. Even area breweries use the discarded cocoa nibs and shells to make chocolate beer.

Olive & Sinclair’s impeccable product has received many awards and accolades. They were voted “America’s Best Chocolate” by Southern Living Magazine and featured as “Nashville’s Best” in Bon Appétit magazine. Scott recently won the “Rising Star Artisan” by StarChefs.com and was interviewed by Celebrity Chef Alton Brown. Actress Gwyneth Paltrow was one of the first promoters of O&S through her weekly lifestyle newsletter goop saying, “Each wrapper design, like the chocolate inside, is exquisite.”

This year Olive & Sinclair relocated to an even larger location in East Nashville on Fatherland Street to meet the current demand of 1,200-1,500 bars a day. The building was one of the original H.G. Hill grocery stores. It is decorated with vintage memorabilia and now houses their factory and retail space featuring their new line of truffles. Another exciting thing: they offer $5 factory tours every Saturday on the hour starting at 11:00 a.m. with the final tour at 4:00. They request you email them to reserve your tour.

Olive & Sinclair chocolate is available at retail locations in 40+ states along with Canada, the U.K., Japan and Singapore. For wholesale opportunities for your store, click here.

Nashville is proud to be the home of the finest chocolate in the South. To Scott and his crew at Olive & Sinclair: your culinary craftsmanship shows us all what is possible if we work hard and dream big.

Watch their charming video below and their Tennessee Crossroads video here.