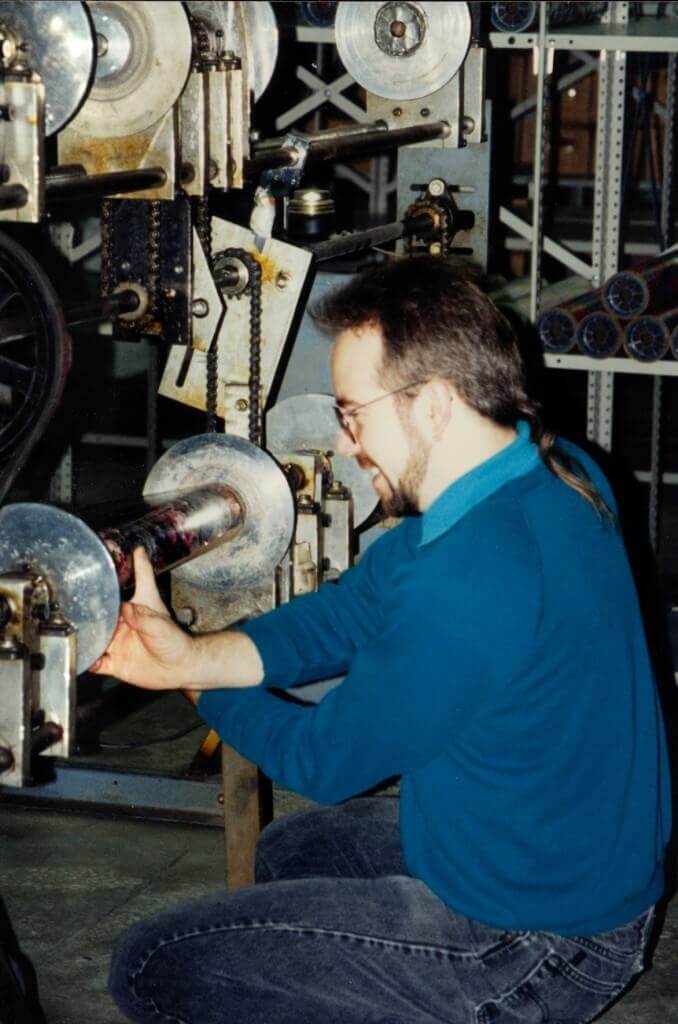 Robby and I were raised by thrifty and resourceful parents. Our Dad rarely threw anything away. Rubbish-rescued odds & ends often made their way into his DIY projects. Once he made a patio light cover from Mom’s discarded aluminum bun warmer! So today’s buzzwords like conserve, recycle and reuse are nothing new to us – they’re just the way we were raised.

In the 70’s our Dad and my husband Charles were apparel reps traveling Tennessee, Kentucky and North Carolina. One of their customers had a textile business in Mountain City, Tennessee. Proud of the beautifully-printed polyester fabrics, the owner showed Dad around the facility. During the tour Dad asked about the 8-foot rolls of paper stacked high out behind the building. The owner explained, “It’s the paper left over after the fabric printing process and it’s becoming a problem. It’s filling up the landfill so fast the city wants us to find another way to dispose of it.” The rolls were beautiful florals and other patterns, but the printed side was on the inside of the roll

The Making of a Gift Wrap Machine

Dad could not get this paper off his mind. His customers were paying a bundle for gift wrap. He told my husband about it. My husband had a great imagination, and together with a machinist friend, he designed and built a machine that re-rolled the paper, turning it pretty side out, and then cut it into 24-inch rolls that he and Dad could sell to their customers – cheap!

All they had to do was get the paper down the mountain from Bristol to Nashville – no small job. They rented trailers and made a bunch of trips up and down the mountain. It was dangerous driving along curvy roads with big trailers hauling heavy paper rolls. I remember all the hair-raising tales of near misses and close calls.

Dad and Charles started including a few rolls of the recycled wrapping paper when they went on the road with their dress samples. They quickly sold out. Their time off became time to make more. Soon my basement was full of wrapping paper, paper cores and related mess! Busy with the apparel business, Dad and Charles really didn’t have time to deal with the paper business. So, Dad and Charles sold Robby the works, the machine and everything.

Robby called his new business Nashville Wraps. Soon the paper was selling fast and his new customers were asking for matching ribbon – so he sought out vendors for ribbon – and then they needed boxes – and so on. You get the idea!

The picture at the top shows a Nashville Wraps employee from 1996 cutting down the gift wrap using this paper cutting machine. We no long use this paper cutter, but it was instrumental in the foundation of our company and the philosophy of reuse, reduce and recycle.

Nashville Wraps has come a long way from that first roll of gift wrap to the current 140-page, 4-color catalog and successful website with 15,000+ products. And to think, it all started 36 years ago by recovering and recycling paper that was landfill bound, paper that we still reclaim and recycle to make our Economy Reclaimed Paper Merchandise Bags!

Check out our 1976 Pinterest board to see if you remember the year we began.

Kathy works with the Nashville Wraps’ Marketing Team as a packaging consultant and photo stylist. She is also a Master Gardener and enjoys her greenhouse and garden, three spoiled dogs, hubby and grandkids in her spare time. She also loves any kind of craft and spends rainy days in the art studio she shares with her creative husband, Bill.