With the Summer Olympics in London coming up July 27th, we found this report to be quite disappointing. During the opening ceremonies, Team USA will be wearing uniforms designed by American designer Ralph Lauren, but manufactured in China.

ABC News first broke the story and discovered “Made in China” labels on every stitch of the clothing and shoes. The prices aren’t cheap either:

“If awards were given out for breaking trade laws, China would win the gold medal. The US Olympic Committee’s use of Chinese-made apparel is particularly egregious due to the ongoing and unfair competition that China poses to American manufacturers,” Brown said.

He added, “China’s illegal trade practices, including currency manipulation, only add insult to injury to American manufacturers. While athletes aren’t allowed to cheat, China is. Our athletes—and the apparel they wear—should represent America. We know how to make things in America, which is why it’s such an embarrassment that Chinese factories were used to manufacture Team USA’s uniforms.”

Brown is also the sponsor of the All-American Flag Act, which would require the federal government to purchase 100% Made in America flags. Imports of US flags from China were $3.3 million last year alone. 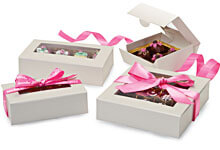 Here at Nashville Wraps, over 70% of our products are made in the USA. We continue to seek out more US vendors for new products like our new Folding Window Candy Boxes. Available this September, these elegant candy boxes feature clear cello window lids and have die-cut ribbon slots which can be laced with multiple width ribbons to achieve your own signature look.

Let us know what your business is doing to buy American and what you think about our Olympians wearing uniforms made in China. Regardless, we are still proud to be Americans and proud of our US Olympic Team!