When I go hiking in the mountains, there are reminders posted on the trail that say “pack it in … pack it out”. It means if you bring something on the trail, take it back with you. Helping to keep the trail in its natural condition is being responsible with the resource. Another way to say this is to “tread lightly” by not leaving a visible footprint in the natural environment.

As individuals and as members of our larger community, the footprint that we need to pay attention to now is our “carbon footprint”. We can make conscious choices to reduce or even to remove our carbon footprint in the environment.

Why be concerned about carbon?

The earth’s ecosystem cannot work without carbon. We cannot live without it, nor can any known living organism. But our world depends on a delicate balance of many things working together in a symbiotic relationship. Remember the biology of plants? In photosynthesis, plants combine water and carbon dioxide in the presence of sunlight to form glucose and oxygen. It has been in balance for eons.

I’m not a scientist, but it doesn’t take a scientist to know that my environment is dramatically changing. I have been fortunate to dodge tornados by a close margin, while others have not been so fortunate. It doesn’t take a lot of convincing to know that our climate is getting warmer earlier; our weather is more severe, more often; and we have dealt with it long enough now to know it is getting worse instead of better. Climatologists and meteorologists like Dr. Jeff Maters of www.wunderground.com have been saying for years that the main issue is a rise in global temperatures due to increased carbon dioxide in the atmosphere. It only takes a very few degrees to start a lot of change – remember the key words, “delicate balance”.

By looking at ice cores, the levels of carbon dioxide have been studied from earth’s distant past to get a feel for what a balanced level would be. In the past, CO2 levels were under 300 parts per million (ppm). Today that level is 392 ppm. It has been determined that 350 ppm is a potential “safe limit” for humans. While I can’t confirm or deny that 350 level, it seems advisable to reduce any potential causes of our climate change.

I remember when man first saw the earth from space, and also the pictures of a distant earth returned to us from Voyager 1. It is so apparent that we have a very thin atmosphere, so thin in fact it is fragile. A “tiny blue dot” as the late Carl Sagan once said. 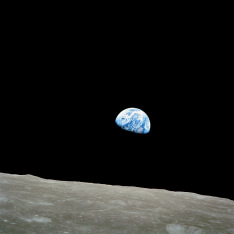 In December of 1968 as the astronauts of Apollo 8 swung around the moon on their first orbit, their camera captured an unexpected sight. There on the moon’s horizon rising up was the beautiful blue earth. And while reading scripture on December the 24th from the book of Genesis, Frank Borman finished up by saying, “And from the crew of Apollo 8, we close with: Good night, good luck, a Merry Christmas, and God bless all of you – all of you on the good Earth.”

Like so many things in our society, the concepts of carbon levels, global warming and even climate change are controversial. Banning plastic bags in favor of paper bags (or no single-use packaging whatsoever) is gaining traction, but the merits of such bans should be further debated. Both paper and polyethylene break down into carbon dioxide and other organic compounds over time. Recycling plastics is a good way to contain the CO2 in retail packaging, and recycling paper keeps trees alive and removing CO2 from the atmosphere for a longer time. This is one of the reasons Nashville Wraps created the Green Way® Brand with high percentages of both recycled paper and plastic materials.

There is probably a similar argument that diet sodas are bad for me, but just in case I try to go easy on them. Here are a couple of resources that I have read and find interesting: Weather Underground and a grassroots movement to do something about it at www.350.org.

Nashville Wraps is the leader in eco-friendly gift & gourmet packaging. Our focus since 1976 has been beautiful packaging, competitive prices, fast shipping and taking care of our customers. We listen. We care about your success. Most of all, we want to make your business look good.